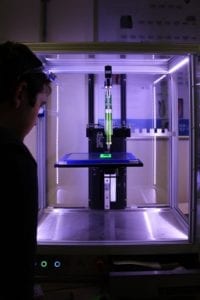 In the past century, few people have heard about a 3D printer and what its capabilities are, and certainly no one could have foreseen that in the near future, such devices would be able to print real houses. Today, 3D printing is a dynamic field with great potential.

3D technologies that will change humanity According to the analysis carried out, this area is only at the beginning of its development; therefore, in the near future, AF technologies will be able to more significantly influence the development of the construction business, redistributing spheres of influence and income. Thanks to existing facilities created with the help of 3D printer technology, one can already see today what is in store for us in the near future.

Villa in Beijing, created by Huashang Tengda. The area of the object is 400 square meters, while it was built in just 45 days. Using a huge 3Dprinter with a manipulator, the company’s specialists built a villa whose wall thickness is 2.5 cm. This building is able to withstand even an 8-magnitude earthquake. In addition to the rectangular box, the object also had rounded turrets. It is worth noting that a 3D printer significantly reduced financial, time and human resources, because, using conventional technology, it would take more than 3 months to build such a villa.

Mini-buildings in Barcelona, created by the Institute of Architecture of Catalonia. These objects have an interesting, unique architectural form. When printing them, experts used several small 3D printers, which created high-rise buildings. The construction process was very interesting: one 3D printer built the foundation for the next one, increasing the number of floors of the building to the required height. Such devices are easy to move from place to place, and their cost is low. A distinctive feature of this technology is the possibility of round-the-clock work without interruptions.

Buildings from the ground in Barcelona, created by the Institute of Architecture of Catalonia. 3D printing technology used for the construction of these objects, allowed the construction of the usual soil. Experts, using ordinary soil and a few additional components, created a natural material with tensile properties 3 times more than that of clay. It is this discovery will reduce the cost of housing, significantly changing the construction business in the world. Even poor countries can afford to provide housing for all those in need.

Unique architectural forms in Amsterdam, built by the Dutch architect Yanjap Rheissenars. This original structure was created by one large 3D printer with a 6-meter manipulator. This technology for creating buildings has opened up for the world the opportunity to create objects “without a beginning and an end” that you would not otherwise build.
Autonomous mobile homes in Oak Ridge, USA, invented by the Skidmore, Owings & Merrill architecture bureau. This mobile home is an original building with a length of 12 meters, a width of 3.7 meters. The design is uniquely equipped with solar panels that are capable of delivering the collected energy and providing it with a house, and even an electric car designed for a mobile home. Thanks to such housing, people will be able to explore new places on Earth.
Temporary housing in 30 minutes, France, developed by the University of Nantes. The use of 3D technology for the construction of temporary shelters, will allow to solve the global problem of accommodating refugees, after hostilities, cataclysms, natural disasters. Such houses are built very quickly, they have rather simple forms, they are not durable, but they fulfill their main function – to save people from cold, precipitation, and sun. Print temporary housing from polyurethane compounds high-speed printer with a manipulator. This technology will be on the replacement of the usual and inefficient tent campsites.

3D carbon dioxide printing, Los Angeles, invented by CO2NCRETE. Thanks to the unique developments of this company, it became possible to convert carbon dioxide, which is emitted into the air by industrial companies, into a durable building material, similar in properties to concrete. This method has not yet been patented, it is being carefully studied, but with a successful outcome it will improve the ecological condition of our planet and reduce the use of earth resources.

3D printing of bridges in Amsterdam, developed by MX3D. This rather complex engineering task was successfully accomplished by two 3D printers, the appearance of which was similar to automotive robot welders that moved in six different directions. The bridge is still under construction, but most importantly, at the moment it meets all the standards. Completion is scheduled for 2107 year.

Brick-conditioner, Oakland, USA, an invention of the company Emerging Object. These bricks, printed using 3D print, have a built-in cooling system and function by absorbing water with its gradual evaporation. Building a house with at least one wall of such bricks will allow natural air conditioning at no additional cost.

Plastic houses in Chicago, created by the architecture studio WATG. It was the construction of houses made of carbon fiber-reinforced plastic that became an excellent alternative to basic or classical building materials. Such buildings are printed on a 3D printer not entirely, but with separate sheet panels, which are already in place combined into one design.

What Is 3D Scanning And How Does It Work?