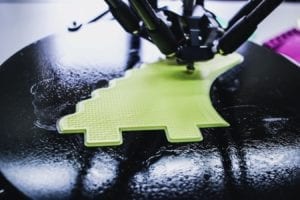 To print a three-dimensional object on a 3D printer, you first need to make it a three-dimensional model – a visual graphic image of the object. Previously, the simulation was carried out manually using special software. Miscalculations in the drawings inevitably affected the final result. To level the human factor, to speed up and simplify the process of modeling invented the 3D scanner.

Three-dimensional scanning makes it possible to obtain a complex-profile three-dimensional model of the object under study – a 3D scanner digitizes the object, which allows you to quickly make it a mathematical model for subsequent printing on a printer.

The device creates a cloud of points connected by lines that form the geometry of an object from a set of intersecting planes. The obtained coordinates are processed and saved as a parametric model, – you can work with it in any CAD system to remove drawings of individual elements of an object, refine it, adjust dimensions and other parameters necessary for programming the printer.

Where is the 3D scanner used
The scope of scanning equipment is unlimited. The use of additive technologies allows to reduce production costs, reduce waste, reduce the weight of parts made in the traditional way. 3D scanning is used in the following directions:

Manufacturers of clothing and footwear have already announced that 3D scanners will soon appear in fitting rooms. This approach will allow buyers to order customized outfits and original shoes, and manufacturers – to quickly and accurately reproduce the model without using patterns and confrontation with the client. It is expected that people will be able to use their scanned and digitized silhouettes for a virtual fitting outfits, without the need for dressing up.

3D scanning methods
There are two methods of volumetric scanning – contact and non-contact.

Contact 3D scanner works by touch. The instrument traces the object, and each edge is examined with a special probe. Previously, markers were put on the object under study, forming a coordinate system. In areas with a large bend the distance between the points was made minimal, on flat planes – the maximum. The scanner took the coordinates of the points – a 3D model was formed from them. Modern devices do without applying a physical grid.

Contact scanning does not depend on lighting conditions. Work with the device is easy to learn. But there are a number of drawbacks: the scanner does not distinguish between textures, and for processing a large object, you will have to sweat pretty much with the device in your hands.

The non-contact three-dimensional scanning method is divided into two subspecies: active and passive. Devices for active 3D scanning use ultrasound, a directional light source, a laser or X-rays to irradiate the object under study – the device calculates the return time of the “signal”, forming a coordinate system from the points of contact with the object and the distance to the scanner. The operator scans the object at different angles, and the software glues the parts together.

The advantage of an active type 3D scanner:

At the same time, there are significant omissions:

the scanner is unable to work with mirror surfaces and transparent objects;
To work with small products need powerful optics.

A passive 3D scanner is still the same digital video camera that shoots a test object from different angles, capturing its silhouette. It works only on high-contrast background and in good light. The footage is processed by the software and reduced to a 3D model for printing on a printer or processing in CAD systems.

What to look for when choosing a scanner
A device that is equally good at scanning for engineering and entertainment purposes, while making high-precision models, can cost tens of thousands of dollars. When buying a 3D scanner, you should pay attention to the following parameters: