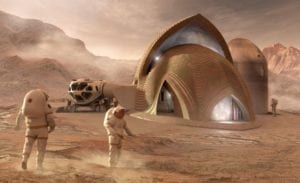 NASA announced the winners at the next stage of the 3D Printed Habitat Challenge.  The main task of the competition is the development of 3D printing technologies for residential and working buildings on Mars.

The competition has been going on for the fourth year already, and during this time the participants managed to pass from simple sketches of future Martian colonies to elaborated architectural projects and visual demonstrations. The competition is divided into several phases, each of which in turn consists of several stages. At the previous stage, which ended last month, the contestants prepared a detailed description of the projects of the inhabited Martian structures, and the American-Russian team of SEArch + / Apis Cor entered the top five and divided the prize pool by presenting the design on the title illustration.

SEArch is a New York architectural bureau working with NASA on ideas for Martian settlements for ten years or so. Of course, the company took part in the competition and even won in the first phase of the competition by presenting the conceptual design of the “Martian needle” – a 3D printed living module with an ice shell (pictured above). The idea, of course, is interesting, but then SEArch had to adapt to additional competitive conditions, namely the use of cement mixtures made from “improvised” materials, that is, regolith and plastic waste. Here, American architects teamed up with Irkutsk engineers – the company Apis Cor, which developed an unusual 3D construction printer and successfully demonstrated the capabilities of its offspring by printing a demonstration house in Stupino.

Now it was the turn of the next practical demonstration of the proposed additive technologies. By the way, such exercises have been carried out several times, but the tasks have been complicated each time – from 3D printing of simple samples from construction mixtures based on the conditional Martian soil and secondary polymeric raw materials to examples of load-bearing elements of building structures, for example beams. The third phase poses the task of building prototypes of buildings on a reduced scale and consists of five stages. The first, as we already mentioned, provided for the elaboration of an architectural project, and at the second stage, participants were asked to print the foundation.

The obtained samples were tested for strength, including with the help of gravity and the Olympic core (the main thing – do not drop on the leg!). The best result was shown by the team of SEArch + / Apis Cor, who received a bonus of $ 55,154.77. The second place was taken by the team of the University of Pennsylvania, and the honorable third was the team FormForge / Austin Industries / WPM. In the next stages, participants will demonstrate other 3D-printed elements, up to the final competition next year, when it will be necessary to build a full-scale design in a scale of 1: 3.