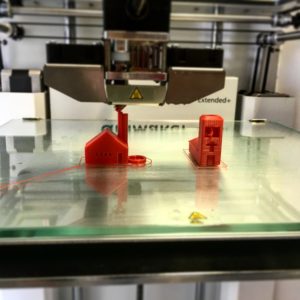 Since we know that humanity produces titanium amounts of waste, all industries try to act (or at least pretend to operate) ecologically. It is not surprising, therefore, that the latest fashion for the use of 3D printers in the production process was also taken under the microscope.

The topic of waste segregation, saving materials and reducing the presence of harmful rubbish in the environment is constantly on the candlestick. Social awareness in this area is growing, because if not ourselves, then who is to care for the world in which we live? As far as we know that ecological solutions can be used in the case of classic printing, how does it look with 3D printing?

One of the positive aspects is the possibility of using recycled cartridges in 3D printers. They are of course much less durable and lower in quality, but waste treatment is an important part of caring for ecology. Unfortunately, solutions based on recycling are unlikely to be accepted in professional production processes, as materials originating from waste processing are characterized by drastically reduced mechanical properties – they are simply more fragile.

In the production itself, two main methods are distinguished: one is a cavity and one a waste less one. The first one concerns mainly elements manufactured using traditional methods of metal materials (titanium, aluminum, gold, silver, etc.). The machining is then very complicated, and after it is finished, there are many debris that can hardly be used again. The second method is used for production based on plastics – it is an injection method, consisting of filling the matrix with a liquid material, which solidifies inside, actually not producing any waste, if not counting the matrix itself (it should be replaced from time to time).

In 3D printers, the SLS method is used, which uses a high-power laser whose radius is sintered with small particles, both plastics, as well as metal and ceramics. As a result, waste remaining after the “pattern” can still be used for subsequent projects. The 3D printers using this solution allow to significantly reduce the amount of waste generated during production, it is not surprising that the largest companies in the world, to mention even Apple, Dell and General Electrics, reflecting on the introduction of 3D printers as a permanent element of the production process.

Another aspect of the ecological use of 3D printers is the hypothetical limitation of transport. If we could get a situation where the 3D printer would become as popular as ordinary printing devices, instead of buying, for example, toys and waiting for their delivery, we could buy toy plans and print them ourselves. And although the argument itself is quite logical, the world is still far away from this state of affairs.

3D printing, although more environmentally-friendly than traditional methods of producing objects, is unlikely to have a significant impact on blog ecology. First of all, it is still an experimental method that does not allow for creating more complicated elements that are important during production. The glory is the famous self-replicating 3D printers, because they would not be able to print important, miniature elements of themselves. There is no reason to count on producers switching to 3D printers, because it would be too big a loss for the industry supplying production materials, and large corporations will certainly not allow it.