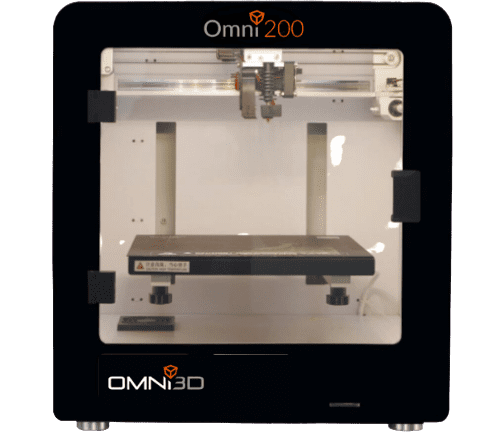 Currently, the manufacturer is developing cooperation with industrial and scientific and educational centers, and accordingly, a professional line of 3D printers is developing. In early 2020, an amateur-grade model appeared with the Omni3D logo: Omni200.

The Omni200 3D printer can be classified in the high end of the hobbyist segment. The functionality of the device is typical for devices of this class.

The main feature of the Polish model is the presence of an all-metal body and an aluminum extruder. A closed case means that the object during the printing process is protected from sudden changes in ambient temperature, drafts, for example, and the likelihood of the appearance of defects associated with them – delamination, peeling of the model from the platform – is minimal.

In addition, a closed chamber provides a higher level of security compared to an open one. Therefore, the Omni200 can be considered as a 3D printer for a school or other educational institution.

Another quality feature is the presence of a flexible magnetic substrate. The use of a flexible backing means that the printed article is easy to remove from the cooking chamber and peel off from the backing.

The capabilities of the Omni200 3D printer are typical of the basic segment. The maximum temperature of the extruder is 260ºC and the working table is 100ºC. The dimensions of the working chamber are 200x200x200 mm. With a minimum print layer thickness of 50 microns, the accuracy will be sufficient for most projects.

The Omni200 is a factory-assembled device. It can be plugged in and used out of the box. Since all components are installed initially, only the flexible backing, instructions, and warranty card are included with the printer.

Getting the Omni200 up and running is the same as setting up any desktop indoor 3D printer. There is a filament compartment on the printer under the cover. The operator installs the spool and feeds the filament through the Teflon tube into the extruder. Files are downloaded to the printer from the SD card.

The manufacturer recommends using the Simplify 3D slicer with its printers. This program is designed for both experienced and novice users. The Simplify 3D interface is quite simple. An important advantage for some users will be compatibility not only with Windows but also with Linux and MacOS.

The Omni200 is designed for use with common filaments with a melting point of 250 ºC or less. Plastic materials with different physical and chemical characteristics are available to the user:

One of the most common uses for FDM printers of this level is to create bright merchandise and original gifts.

Omni3D used a 3D printer to print a souvenir heart for Valentine’s Day.

The printer is also used to create tutorials, autotuning parts, and other products.

Pros and cons of the Omni200

The Polish Omni200 printer, amateur in functionality, but quite professional in the quality of workmanship and printing, can be considered as a device for educational institutions, as well as for the manufacture of small parts of prototypes and homemade devices, or as a trial purchase to get acquainted with the quality of the brand’s products.

The device is made reliably, provides a predictably excellent work result, but the device does not stand out against the background of numerous competitors. The machine is equipped with one extruder and a standard size print chamber. The market’s typical maximum extruder temperature of 260ºC is sufficient for many educational, promotional, and DIY projects.