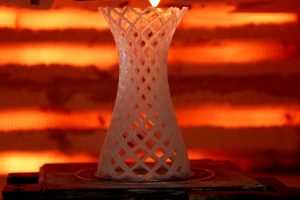 If you ever witnessed how the process of glass processing is done, this spectacle should have remained forever in your memory. This process dates back to ancient times and still remains one of the most popular art forms, and some companies still use traditional technologies in the production of certain glass products.

Until recently, printing glass with 3d printers was equated with fiction, but over the past few years the situation has changed dramatically. Those times when plastic and metal were the only materials have already passed and now we can easily work with ceramics, sand, food and even biological materials. Like other forms of 3d printing, working with glass has several advantages, one of which is the possibility of creating products of unique shape and great variability during post-processing. 3d technologies allow to facilitate both the work of artists and mass production.

For the first time, the use of glass as a filler for 3d printing began talking back in 2009, and news of the promotion of the material periodically appeared around the world. A revolutionary breakthrough was made by the Israeli company Micron3Dp, which presented to the eyes of the public complex products printed at a temperature of 1640 degrees Celsius. The technology itself was similar in many respects to FDM-printing, but only with the use of other materials and higher temperatures. A lot of money and effort was spent on developing the equipment. In the same year, Micron3DP installed alpha versions of 3d printers for its own facilities, and the results were demonstrated at the Formnext exhibition, which was held in November.

Soon after Micron3DP announced a revolutionary technology, MIT went on its steps, namely the Mediated Matter unit and the MIT Glass Lab. These groups were combined by a project with the name G3DP (Glass 3D Printing), and the result was a 3d printer with a camera temperature of 1037 degrees. The glass passed through the nozzle, after which it was cooled and solidified.

MIT also worked on a second project, which allowed to work on large-scale products. The technology included a digital system of thermal monitoring and support at various stages of glass formation, and also received new guides that controlled the flow along 4 axes. The capabilities of the new 3d GLASS 2 printer were demonstrated only in 2017, as part of the Milan Design Week.

But if the previous researchers started from the principle of FDM-printers, the representatives of the Karlsruhe Institute took as a basis the SLA technology. It is worth noting that this group did not create something fundamentally new – they took a commercial SLA 3d printer and used it to work with glass. Even such a seemingly crude approach was able to show fairly good results, which were several times better than when creating products by classical methods. As a filler, glass powder was used, and the main advantage was the complete absence of chemicals in the air. The main products are polymer resins, which are burned in a special furnace at the end of printing.

Another method of 3d glass printing was developed at the Lawrence Livermore National Laboratory, where special ink was used. Unlike FDM-technology, this form does not need high temperatures, and products can be created completely in any room. Inks are created from concentrated suspensions of silica particles, which are also used to make lenses. The only drawback of this method is that some composites are not available in the market or in retail.

The technology of 3d glass printing over a short period of time has come a long way. Just a few years ago, only talked about it, and now some companies use different ways to produce the most unimaginable products. 3d glass printing is used in both the artistic and technological areas. Most likely, this technology can never replace the classical methods of production, but its application in some areas is more than valuable.