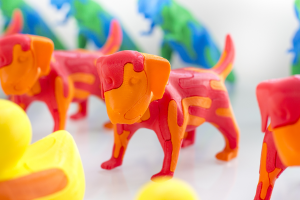 The Brooklyn designer Fleet Hauer and the company 3D Hubs have teamed up to release three-dimensional Lock-Nesters puzzles, printed on a 3D printer. The Lock-Nester collection is represented by six puzzles, the complexity of which varies from 5 to 185 parts. In the future, developers plan to present over 100 color combinations.

“I always liked puzzles, I liked to connect their details to each other, only that lack of freedom, which gives our three-dimensional version,” says Hauer.
Instead of using standard forms, Hauer decided to invent for each part his own version of the connection, the design of which depended on its shape and the shape of the parts next to it. As a result, between the finished three-dimensional figure and each of its details a close relationship was formed, which only added to her unusualness and attractiveness.

To create his puzzles, Hauer chose 3D printing technology, because it is ideal for quick and simple prototyping. After much trial and error, he managed to find the best connection options that allowed the details to stay together and not fall apart. “The details of the first prototype did not hold together at all. The same thing happened with the second one. Only after several hundred failures did I finally have a kind of flair for the successful options of connection. ”

Since all the details turned out different, 3D-printing technology was the best option for the implementation of Hauer’s ideas and allowed him to move to large-scale production. “Traditional methods, like injection molding, are bundled with prohibitively high costs. On the other hand, 3D printing is an affordable and convenient way of production, for which the shape of the products does not matter, “explains Hauer.

Prices for puzzles start from 20 dollars. They can be printed in any of the 8000 points of the global network of 3D Hubs. This means that customers can order the printing of puzzles in 3D Hubs and get them delivered home, saving on shipping and third-party services.

Now, Hauer is going to move to the next level and offer his clients more freedom. “All of our work is subject to algorithms, so in the office we just do what we do with digital modeling and code writing. We plan to increase the client’s involvement in the puzzle production process and allow him to change the design of the finished product, “says Hauer, implying that the customer will be able to choose the shape and color of the details and even offer his own model for the creation of his personal puzzle.