A group of engineers from the Karlsruhe Institute of Technology developed a new method for 3D-printing glass, which has much greater accuracy than what is available today. The work was published in the journal Nature.

The production of transparent glassware of arbitrary shape requires a complex thermal and chemical treatment. Because of this, the use of traditional methods of 3D printing for glass, especially for the creation of small details, is difficult. The existing technologies at the time of publication allowed using 3D printing to produce products either with high transparency or with high surface quality (low roughness). The method presented for the first time allowed to combine these two properties.

As a basis for the new method, engineers decided to use stereolithography, which has proved itself in classical 3D plastic printing. Recently, a similar method has been learned to print heat-resistant ceramics. First, a colloidal solution of silicon oxide nanoparticles (the main glass component) in the photopolymer hydroxyethyl methacrylate was prepared. With the help of ultraviolet, passing through the stencil blank was given the initial form: under the influence of ultraviolet photopolymer solidified in the right places, the workpiece was raised, leaving the liquid polymer lower and the process was repeated for new layers. Then, the preform was heated, because of which the polymer was removed, leaving the finished product of pure glass. Final annealing sealed the printed glass removing pores from it. An investigation using spectroscopy and diffraction showed that the resulting glass has an amorphous structure indistinguishable from the glass obtained by the conventional method. 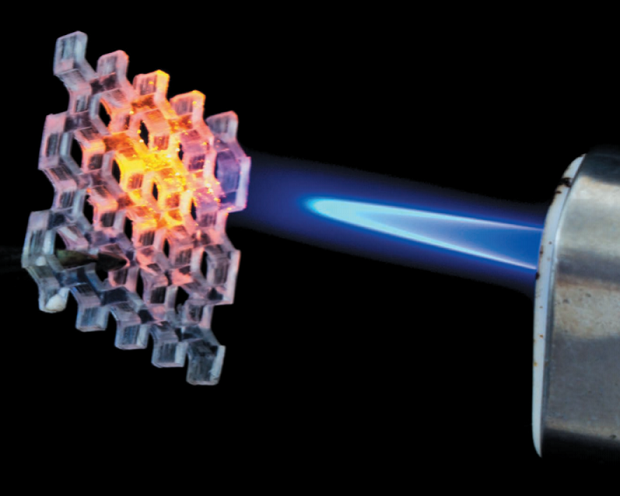 To demonstrate the possibilities of the method, researchers decided to print a model of a medieval castle with a total size of about two millimeters with structural elements of 80 micrometers and a layer thickness of 20 micrometers. The obtained material proved to be resistant to chemical influences and had an extremely smooth and smooth surface, which is confirmed by atomic force microscopy.

The presented technology can be used in microelectronics, compact optical devices and microfluidics, where the size and quality of structural elements is extremely important. Through the use of a common method of stereolithography, researchers hope for easy implementation of the technology.

Previously, researchers from MIT already presented an experimental 3D printer that prints glass, which, however, did not differ in the high quality of the parts produced.