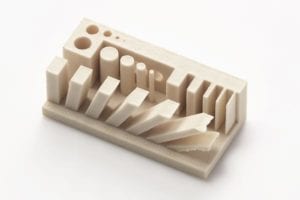 Canon – a Japanese company known for the production of cameras, cameras, and photocopiers and paper printers, announced the development of proprietary 3D printing technology based on ceramics. The method is to allow for the creation of complex and precise ceramic structures, and be used mainly for the needs of medicine.

This is the next entry of the company into the area of additive technologies. In the years 2014 – 2017, Canon cooperated closely with 3D Systems, distributing American products on selected markets around the world. In autumn 2015, he also presented the concept of a 3D printer based on resin that has never been materialized. At the end of 2017, he unexpectedly (and silently …) withdrew from this segment, focusing on returning on his flagship solutions. Now, almost a year after he left the spatial printing, Canon returns, promising a revolution in a relatively neglected sphere …

The Japanese company intends to print ceramic details! It is to be delivered to the machine in the form of a powder and be bonded in a selective manner, based on a method similar to SLM (i.e. selective sintering of metals by a laser beam). Unfortunately, so far everything that has been shown is a handful of details – we do not know anything more about technology, machinery, or even when they would see the light of day? What Canon has been praising for so long is work with a material with a low shrinkage. The corporation claims that just as existing incremental technologies that use ceramics at work (and the resin that is its carrier) during post-processing shrink by approx. 20%, in the case of its method the contraction is symbolic and amounts to less than 0.8% . As an example, give the following detail with a diameter of 19 mm.

Ceramics is a very desirable consumable material, but few manufacturers have managed to develop techniques able to tame it. Selected companies producing photopolymer 3D printers offer ceramic and resin composites, and attempts are made to press ceramic materials through the heads in a derivative process to FDM (i.e. 3D printing from plastic). Big promise is also 3D printing with the so-called “Liquid ceramics” (i.e. ceramic nanoparticles embedded in drops of resin) developed by the Israel XJet, which unfortunately has not yet hit the market.

When it comes to Canon, just like the company has the ability to develop and implement such technology, the way it presents itself is somewhat fascinating … As vividly reminiscent of the actions of October 2015 when the renders of the machine that was supposed to coil the market were presented. At the moment, we do not know anything except that the concern “is working on something crucial” – we do not know the deadlines, technological assumptions, real possibilities of this method?

Let’s hope that what we are now dealing with is the introduction to a well-thought-out and complex promotional campaign, and not, for example, the “innovative projects of the future”, to prepare the ground for upcoming publications of periodic financial results …