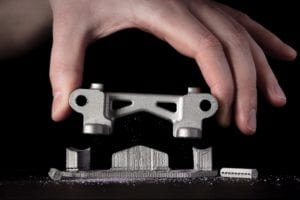 Company Desktop Metal has developed 3D printers that promise to radically change the idea of ​​printing models from metal. Moreover, the company is ready to begin next year the supply of industrial printers, which will be hundreds of times faster than modern systems with laser sintering and 10 times more economical in operation, including lower cost of consumables.

What is important, the operation of such systems will not be different from the use of traditional office printers. Working with 3D-printers Desktop Metal does not require special knowledge from the staff and special protective equipment for him, as well as not needed will be specially equipped rooms (ventilation, water supply and other). New printers can be placed in a room of a normal office or at home next to the sofa.

In the current year, Desktop Metal plans to begin shipping the Desktop Metal Studio System. The estimated cost of the printer is $ 120,000. Laser 3D printers that are already in operation at NASA or in Boeing are similar in terms of tasks, costing $ 1 million and require special production facilities for work.

The Studio System printer uses special cartridges with bar material for operation. These are ordinary metal powders or alloy powders for the commonly used in the injection metal forming industry, rather than special powders for laser sintering. The use of MIM-powders (Metal Injection Molding) immediately reduces the production of models by a factor of 10, and more than 200 types with a melting point up to 1400 degrees Celsius can be used for such powders. The powder in the bars is connected by polymer composition and does not crumble, and working with such material is similar to working with conventional ABS plastic.

Printers Studio System are designed for engineering prototyping. After manufacturing, the model is processed in a bath with active liquid to wash away the binder polymer, and then it is fired in an oven to burn out the polymer and the best bunch of metal. The declared density of the model is 99.8% of the density of the metal used. The annealing process is automatic and does not allow damage and melting of the model.

A truly interesting solution for the industry is the Desktop Metal Production System. With the Production System, production of limited batches of precision with a precision of 50 microns will be more profitable than traditional processes, including mechanical processing of metals, forging or casting. The working volume of each installation, the cost of which is $ 360,000, is 8.2 liters. The speed of the system is such that for its maintenance, four furnaces for sintering the material are required at the same time. The material is also used metal powder for the industrial manufacture of metal parts. This will reduce the cost of consumables for metal 3D printing 10 times, and 100 times faster production of products compared to laser 3D printers.

In addition, in recent months Desktop Metal has attracted several hundred million dollars in investments, including funding from the Google investment division. It looks like the company’s projects are considered promising.