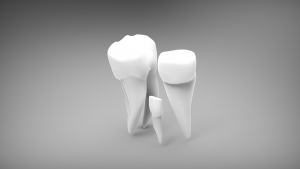 A group of scientists from the Oregon Medical Scientific University (USA) demonstrated a new method for treating root canals using blood vessels printed on a 3D printer. This innovative process reduces the risk of tooth decay, helps to fully restore their functions and promises a revolution in dentistry.

Root canal therapy is a time-consuming procedure, during which the infected pulp and the nearest nerve endings are removed, the canal is cleaned, filled with gutta-percha and sealed. However, this deprives the tooth of a natural protective mechanism and over time such teeth can begin to rapidly deteriorate.

Thanks to the research of American scientists under the guidance of Professor Luiz Bertassoni, dentists may soon have more effective methods of treating canals based on 3D bio-printing of an artificial network of vessels identical to the present.

Scientific work of researchers published in the journal Scientific Reports. The document describes in detail how artificial three-dimensional printed blood vessels improve the results of the operation of the root canal. This process is based on previous studies conducted by Bertassoni and partners who have found a way to biotic artificial vascular networks that almost completely mimicked the natural system of the body’s blood circulation.

Scientists suggest the following technology: first, the patient tooth is treated in the traditional way, and then a thin polymer fiber with a diameter of 500 micrometers (0.5 mm) is inserted inside the channel, created with the help of a specially developed technology of 3D printing from agarose. The remaining voids are filled with hydrogel containing pulp cells. The fiber is then removed, and microchannels are produced along the entire length of the tooth into which endothelial cells are introduced. Approximately 7 days later, artificial vessels begin to form inside the tooth. In other words, the tooth regeneration process is started.

“This result proves that the creation of artificial blood vessels can be an extremely effective strategy for the full regeneration of the functions of the teeth,” says Bertassoni. “We are convinced that this discovery will change dentistry.”
British scientists are also looking for a way to restore teeth without using seals. Their method stimulates stem cells in the tooth pulp to produce more dentin, a protective film, a filling cavity and protecting the teeth from damage.