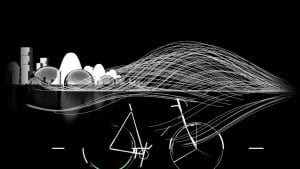 As far as I can remember, the science fiction writers began to dream about 3D printing. They described nanosynthesis, when a complex object is created or copied from the molecules and atoms. In our time, humanity has become one step closer to dreams – a 3D printer was invented and enthusiasts began to make things at home that were available only in industrial production. Not nanotechnology, but getting a finished product without a chip mountain and processing the file is also not bad.

Car enthusiasts did not break the trend. Print a tubular frame – which could be easier! But this is in theory, in fact everything is not as fast and qualitatively as it could be.

There were attempts to create a bicycle from polymers, Australian students even defended their thesis, making a bicycle frame on a 3D printer. True plastic models for some reason fell apart under the testers, and the Australian bicycle for testing was a product of spot welding by a robot and more like a large icicle than a finished product. 3D printer can not yet use traditional construction materials and is limited to several types of plastic.

It would seem, “why reinvent the wheel”? And what is new can be invented in centuries of established design of a two-wheeled vehicle? There are a lot of models with an electric motor, various navigation and auxiliary gadgets, but it never occurred to anyone to use the achievements of modern technology to manufacture the details of the two-wheeled friend. Nobody but the inventors from Belgium.

A group of companies is responsible for the creation under a slightly strange name Flam 王 D (read Flame3D). As already mentioned above, all the details were printed on a 3D printer, and the bicycle was called 王 -Bike (most likely, read as an E-Bike, but we do not vouch). At the heart of the design is an ultra-strong polymer, which is lighter and stronger than any modern aluminum alloy used to create bicycle frames. Of this polymer are made almost all parts of the bicycle, including the wheels and braking system. All parts can withstand an incredibly heavy load and withstand even heavy blows. In addition, some parts, for example, the seat and pedals are made of durable hardened metal, ergonomically repeating the contours of body parts. It is worth noting that such materials are used for the first time when creating a bicycle.