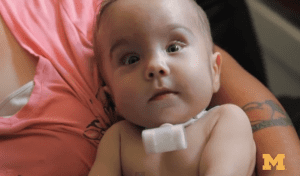 Technologies, such as 3D printing, have been applied since long in the making of models for objects and toys for children. There is, however, the much recent use showing that the technology has also been used for printing out an air passage splint. And this, perhaps, is the first time when 3D printing has been applied to an essential reason as saving the life of a 3 month old baby.

In this procedure of saving a life, the technology was used in combination with medical opinion and this created a somewhat synthetic part. This synthetic part was then used in the infant that helped him to breathe naturally- something that he was sheer incapable of earlier.

The boy now has the name of Kaiba Gionfriddo. The baby boy hails from Youngstown in Ohio. He was born with the severe condition of tracheobronchomalacia. The condition is a rare one with only 1 in 2200 babies suffering. The defect is life threatening as the airways become as weak as to collapse when the baby tries breathing or coughing.

That the baby suffered from the condition was discovered once when the parents were out at some restaurant. The baby had then stopped breathing turning blue. CPR saved the life of the baby for the instant, but later he was diagnosed with the condition. The baby was admitted to Akron Children’s Hospital and put on the breathing machine. A weak diagnosis was carried out.

It was fortunate enough that one of the doctors was in knowledge that a research was being carried out in Michigan on creation of artificial air passage splints. This is where the 3D printing technology played its role as Kaiba’s parents got in contact with the doctors in Michigan following which the case was taken up immediately by Scott Hollister, a PhD, and Glen Green, an MD.

The doctors continued to work on this that could help open up the airways passage so that Kaiba could breathe normally and continually. They acquired an approval from FDA so that they could make a tracheal splint for the baby with the use of polycaprolactone. This is polyester and is biodegradable in nature.

CT scan was performed of Kaiba’s air passage so as to create an air passage splint that should custom-fit him.  It was then that 3D printing was used for taking the print. The operation was performed on 9th February, 2012, for placing it. The splint was sewed around the airway of the baby to offer it greater support. This should help it become stronger and grow with age.