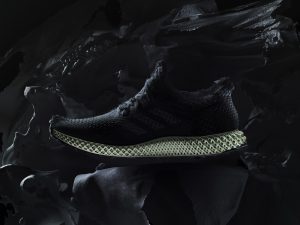 The world-famous manufacturer of sports equipment and clothing Adidas has been experimenting with the use of three-dimensional printing technologies in footwear production for quite some time, but the latest model of sports sneakers called Futurecraft 4D is undoubtedly the ambitious creation of the company. The Futurecraft 4D is manufactured using Continuous Liquid Interface Production (CLIP) technology. This is a technology of three-dimensional printing of polymer materials, cured by light. In the case of Futurecraft 4D, liquid polymer resin and ultraviolet radiation are used.

The technology developer – a start-up in the Silicon Valley called Carbon – claims that it is their decision that can make serial production of footwear by 3D printing a reality, as they provide greater flexibility and speed than traditional additive printing. Investors Carbon are foundations created by Google and General Electric.

Carbon assures that its technology allows companies to move as fast as possible from design to mass production. They also say that when using their developments, the output produced is much more reliable and elastic than plastic counterparts made by injection molding.

And although the technology itself looks very promising, Adidas is still in no rush to jump with two feet the future, where three-dimensional printing is one of the main technologies of footwear production. Not yet. Only 5 thousand pairs of Futurecraft sneakers will go on sale at the end of this year. However, by the end of 2018 the company plans to increase the output to 100 thousand pairs of such footwear per year. So this may well be the beginning of a new era in the sports shoes market.

One of the advantages of using 3D-printing for running shoes is the possibility of producing small batches. It can be limited shoe parts, dedicated to certain events and things. It can be expensive and designer sneakers, takes into account the individual characteristics of the athlete’s foot and gait. But it will not be long before Adidas and Carbon lower the cost of production to the appropriate level to make such shoes mass.

How much will a pair of Futurecraft 4D sneakers cost? The manufacturer does not say, but notes that they will belong to the “premium” price segment. In other words, they will not be cheap.